A Cardinal reversal.  Ball State has announced everyone — whether you’re vaccinated or not — will have to wear a mask inside all buildings on campus. That includes faculty, staff, students, and visitors. 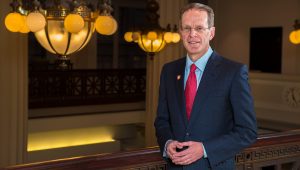 Cop think they found the missing driver from that crash that killed a man earlier this week.  Chief Deputy Jeff Stanley said the man on Wednesday was in a hospital — believed to be in Indianapolis — being treated for serious injuries suffered in the crash, at Cowan Road and Old Ind. 67.  It looks like the unidentified man ran a red light, driving a stolen truck, and crashed into another truck, killing Chandus Dale Spradlin.

Officials with the City of Muncie administration and the Storer Housing Development Committee are planning a public meeting about the development, August 24th at 6:30 p.m. at the Northside Church of God (1505 N. Tillotson Ave.).  Earlier plans included a pond, but water and soil tests show a need to utilize a dry bed water retention area instead of a wet bed retention pond.   The new proposed subdivision, will create up to 34 lots for homes when subdivided.

In April The Herald Bulletin made an access to public records request seeking the amount of money received and how those funds were spent by the Visitors Bureau.  Although the request was initially denied, the Visitors Bureau did provide the requested documentation.  Now, the Indiana Public Access Counselor has determined the Anderson/Madison County Visitors Bureau is not a public agency, and is not covered by open records rules.  The three members of the Indiana General Assembly representing Madison County all commented earlier this year that there should be transparency when it comes to spending the tax dollars.

Some changes at schools last year have become permanent – like at Muncie Central High School, where they’ll have no permanent locker assignments again this year

COVID statistics:   March 17th, 177 people died statewide and thankfully those numbers have declined dramatically since then.  Yesterday, there were zero deaths again in almost all counties in ECI – the exceptions:  Madison had two, and Randolph had one fatality.  You have likely become familiar with the weekly 2 metric score in Indiana, and the fact that Blue is best – there are far fewer Blue counties this week, Blackford, Jay and Wayne are the ones nearest to us.  Delaware, Madison, Grant, Henry and Randolph counties took a step backward to Yellow.  Indiana has one RED county:  Posey, in the far southwest corner of the state.

Madison County is applying for a $1 million state Community Crossings grant to repave several roads.  The matching funds required have already been appropriated by the County according to the Herald Bulletin.  They’re planning on a bid date of Oct. 5.

Federal prosecutors in Ohio have asked that immigration-related charges filed last year against the owner of a Muncie business be dismissed.  Ignacio Chavez Castillo, owner of All Steel Carports, was arrested in Muncie last October and transported to Dayton, where charges against him had been filed in U.S. District Court.  Documents filed recently in Castillo’s case have not specified why they decided to abandon the prosecution.

Gibson’s Skating Arena says the Muncie Police Department wants to have a skating party and you’re invited!!  Come check out the new floor and skate with Chief Sloan and the MPD officers.   Thursday, August 12th 6-8pm, Free Admission, Skate rental is covered for 18 & under, $3 skate rental for anyone over 18.  If you have your own skates make sure your wheels are clean, they will be checking at the door – to protect that new floor!